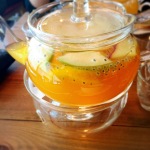 Espuma has been a go-to for office lunches in Central and has recently opened its third branch in Wan Chai’s QRE Plaza. It claims to be a Spanish style coffee house with ’60 years of history and experience in Barcelona style coffee’. Step into Espuma in Central, you see a minimalistic, modern Spanish style dining space, which was filled with professionally dressed Hong Kongers.

You can either choose from the all-day menu or a lunch set-menu, that includes a starter, main and dessert. The all-day menu has a vast selection of teas and coffees, many desserts and both Asian, Italian and Spanish items. Odd, considering it is meant to be a Barcelona style café restaurant. We decided to try out Espuma’s lunch menu, which was very affordable at HKD 100 – HKD 200, depending on the main you chose. 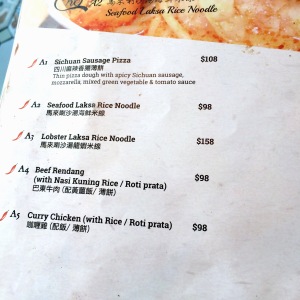 The restaurant seemed a bit confused and all over the place, with Asian, French, Italian and Portuguese offerings on the menu. It had an extensive collection of waffles, coffees and teas, which Espuma is known for. However, it seemed more like a cafe than a restaurant and definitely not Spanish. The food was heavily influenced by Chinese and Asian tastes.

Overall very affordable for a working lunch, but not worth going for the food. Service was good and drinks were good. Might be a good place for afternoon tea.

Yum Critic that currently resides in Hong Kong. Frequent traveller and foodie that also enjoys sampling dishes from the far reaches of the world! View all posts by foodiejem

This site uses Akismet to reduce spam. Learn how your comment data is processed.